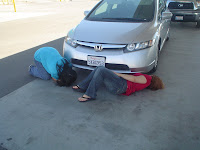 Two weeks ago my boss told me to take a vacation. Well, he did not say it like that. He sent me an email saying he didn't want to pressure me into taking a vacation but it was very very very important that I took one, or his project would run out of budget.
How then did I end up in the middle of the desert, lying on a highway road underneath a car?
Let me back up.
I love my work. There's nothing stressful about my job… except when my experiments don't work, when I have to write a research article but only manage to stare at the blank page for hours and that stupid twitch on my eye-the same one I had while writing my dissertation, and I freak out because by next summer I must find another job and sell the house and the real estate market only keeps on going down, and oh, I hate moving…!
Other than that I have no reason to stress. I was saving my vacation time for an elusive trip to Europe, but after my boss sent that email I basically had no choice. I first considered going ahead and taking that trip to Europe. A quick search on www.travel.yahoo.com assured me my budget would not allow it, so I opted for something better: I emailed IntASU (for reference, please look at the picture at the bottom of this page).
Within minutes I had two invitations. One was from N who assured me I could stay with her in Phoenix and the other one from E who invited me over to L.A. with lots of exclamation points, since she recently moved there and was feeling lonely. Other IntASU members, who now live in CA, replied saying they would join us in L.A. Others would drive from Phoenix for a total of 11 people. I was very excited about this and immediately took their offer.
N told me she had another friend staying with her from Chicago. Her name is B, and we would share the cost of the trip. The plan was simple: I would fly to Phoenix (Southwest $49 each way), stay with N, then we would rent a car and drive to L.A.
Yet, things have a way of not working out exactly the way you plan. We were driving on I-10 from Phoenix to CA and talking about going from zero income to being successful career women, and happy we had rented a hybrid, when we heard a noise. We turned the radio down and there it was again. It sounded as if something got caught under the car and was being dragged.
I was volunteered to go out into the 112 degree climate to take a look because I was the only engineer in the group (bioengineer, to be exact). I was expecting to see a poor little squirrel or what remained of one, caught in the wheel, but instead I noticed the noise came from a panel beneath the car which covered the engine. The panel had fallen off on one side and was scraping the road. I went half-way under the car and since the panel was made of plastic and somewhat flexible I was able to tug it back where it belonged and we went on our way. No, it wouldn't take an engineer to figure it out but my friends were happy I fixed the problem and we drove on singing and laughing until ten minutes later we heard the noise again. A gas station was not too far ahead and we stopped there. This time I stayed in the car calling the rental company while N and B went looking for a mechanic or at least someone with minor knowledge of auto parts but they came back saying the only attendants were teenage girls and handed me a roll of duct tape.
B was wearing a white mini skirt, so N and I got under the car and taped the hell out of that plastic panel. The rental company would not meet us out in the middle of the desert because the car was still drivable and said we had to drive to LAX to exchange it.
By the next gas station the tape had fallen off and the panel barely resembled one. I was running out of ideas but I had to pee really bad so I went to the Ladies and when I went back out B had fixed the problem with her cute miniskirt. A guy was now under the car tying the panel with a rope. This more imaginative fix allowed us to drive the car to LAX without any more trouble.

We negotiated and got the cost of gasoline waved. At the end because they didn't have any hybrids available and we had to go back to the airport the next day in order to get a hybrid to drive back to Phoenix and meanwhile drive around L.A. in a PT Cruiser, we also got the cost down to about a third of what we expected to pay. Good thing to have an accountant and a marketing executive in the trip as well!
The trips to the airport cut down our vacation time, still we were able to enjoy excellent Asian restaurants, watch the sunset at the beach, walking over the surf with the waves splashing against my legs... oh, I miss living near the ocean... and spend some quality time with IntASU.

Seeing IntASU members was like visiting an ex-boyfriend with whom you still share a good relationship. It brings back memories of times past. It makes you laugh until your stomach hurts... The dinners, the happy hours, the tripos, the campingos, the joking around in bed... and the dancing...

We went to a Salsa club in Colorado Avenue. A is still my favorite merengue dancer, even if E has full rights now (they are now married). My time with IntASU was awesome, but too short. I miss them dearly. The good thing is, no matter where I vacation in the world, I can meet up with a few of them. I know I will eventually take that trip to Europe and see IntASU members who now live there (the Spanish Mafia, the Italian Mafia, the Germans and some of the Frenchies as well). Hopefully some of them will also come visit me in Albuquerque soon (some already have), since one of the reasons I wanted a house was to have enough room for them.
Shopping at the Cabazon Outlet Mall was also great and too short. One thing became very evident, though: unless I lose the 20 extra pounds I have allowed myself to gain in Albuquerque, I will not be able to fit into Bebe shirts or Guess jeans!
While in Phoenix my friends took me to Salty Señoritas to enjoy my favorite drink and celebrate my birthday for the second week in a row. It's incredible to realize I'm into my thirties but it's even more incredible to look back and be able to say "I did all that?!" with a big grin on my face.
Coming home was also nice. The desert heat in Albuquerque goes all the way up to the 90's... haha...! My house looks beautiful even with all the junk my dog KY keeps on destroying and scattering over the floors. I go back to work tomorrow and although work is work, this trip reminded me there's nothing else I'd rather do. Hopefully I'll be able to take vacations more often because they are what makes work truly worthwhile (vacations AND friends!).
Oh, and the twitch in my eye is completely gone.

Love you all from here to there,

Hello I just entered before I have to leave to the airport, it's been very nice to meet you, if you want here is the site I told you about where I type some stuff and make good money (I work from home): here it is 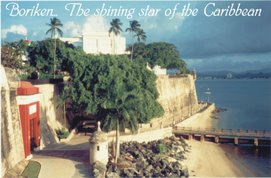 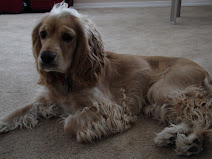